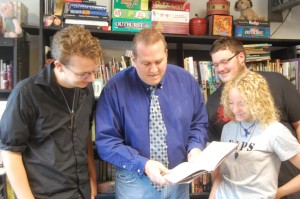 I’ve been sitting on this list all day. It’s hard to make a list. But I made one. And you know what? It’s MY list. . .so. . .I am bringing all of my +1s that I wanted to have on here. So each category now has eleven. And tomorrow there may be twelve. See? It’s not that hard. I am taking a Walt Whitman approach here. Do I contradict myself? Then I contradict myself. I contain multitudes (wink). Okay, Whitman may or may not have winked. It would have depended upon the venue and the audience, I’m sure. So. . .here are my +1s. . .

The end of the year means going back through the reading seasons of 2011. With some of the best titles read this year, I can picture in my mind what I was doing during that time, where I purchased that particular book, or where that book was read. In the case of Dude: Adventures with Dude and Betty, a picture book that makes this list, I remember passing this around the lobby with Franki Sibberson, Donalyn Miller, and Mary Lee Hahn (the owner of the book who just couldn’t wait to share). What a delight to share this title and this becomes a reading memory for 2011.

Perhaps the best part about getting Advanced Reader Copies of books is that at the end of the year you can finally talk about them within one’s reading community. It was with great excitement that I read Lauren Myracle’s Shine on the plane back from NCTE/ALAN 2010. I remember getting a very early ARC of Everybody Sees the Ants by A. S. King and how I spent a May evening in the backyard swing devouring each and every word. I remember how I read Americus, a graphic novel that appears here, online–in installments offered daily by the authors, when good friend, Teri Lesesne sent along an official copy.

When books go viral in spaces like Facebook (with The Centurions of 2011), or Twitter (with the newly-formed #nerdybookclub, or the various discussion forums, it’s easy to get excited for a book. And no book saw a mixture of excitement to read measured with a reflective pause after reading like Patrick Ness’ A Monster Calls.

By the end of the year, I will have read through over 650 books across age groups and genres. This is an attempt to cull from all of those titles that were released in 2011. Any similarities to other posted lists indicates either coincidence or a very, very good book. Enjoy my list. It will not tip the award-selection committees’ decisions nor sway public opinion, but it will at least give you a glimpse of the reading journey I embarked upon during 2011 and the titles I picked up and loved along the way.

Oh, and to be sure, it was very, very, very difficult to not add titles that will release in 2012.

Oh, my lovelies. . .it’s shaping up to be another super, super reading year. Stay tuned.

And now the list. . .(the titles appear in no particular order).

The Pull of Gravity by Gae Polisner

My Life, The Theater, and Other Tragedies by Allen Zadoff

Everyone Sees the Ants by A. S. King

A Monster Calls by Patrick Ness

Bigger Than a Breadbox by Laurel Snyder

Liesl and Po by Lauren Oliver

The Unwanteds by Lisa McMann

Inside Out and Back Again by Thanhha Lai

Under the Mesquite by Guadalupe Garcia McCall

Zombie in Love by Kelly DiPucchio Illustrated by Scott Campbell

Dude: Fun with Dude and Betty  by Lisa Pliscou Illustrated by Tom Dunne

Passing the Music Down by Sarah Sullivan Illustrated by Barry Root

The Scar by Charlotte Moundlic  Illustrated by Olivier Tallec

Balloons over Broadway by Melissa Sweet

Heart and Soul by Kadir Nelson

Things to Say to a Dead Man by Jane Yolen

The Bippolo Seed by Dr. Seuss

B by Sarah Kay

Every Thing On It by Shel Silverstein

Lemonade: and Other Poems Squeezed from a Single Word Bob Raczka

Requiem: Poems of the Terezin Ghetto by Paul B. Janeczko

+1 The Watch That Ends the Night by Allan Wolf

Around the World by Matt Phelan

The Next Day by John Porcellino

Cat Versus Human by Yasmine Surovec

The Last Dragon by Jane Yolen

Amelia Lost: The Life and Disappearance of Amelia Earhart by Candace Fleming

Over and Under the Snow by Kate Messner

Franklin and Winston: A Christmas That Changed the World Douglas Wood and Barry Moser

America Is Under Attack by Don Brown

Drawing from Memory by Allen Say

A Stolen Life: A Memoir by Jayce Dugard

For the Love of Music: The Remarkable Story of Anna Marie Mozart by Elizabeth Rusch

Me . . . Jane by Patrick McDonnell

The Case of the Vanishing Golden Frogs: A Scientific Mystery by Sandra Mark

+1 Flesh and Blood So Cheap: The Triangle Fire and It’s Legacy by Albert Marrin