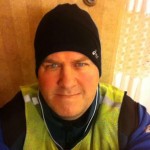 Twelve running miles logged on February 9th, 2013. The longest run to date. Or, for that matter, ever. And it comes five months into a running journey.

And a week before my 43rd birthday.

And what is the old saying? “Seven days without (fill in your own life affirming entity here) makes one weak.”

And I could talk at length about the “weak before.” You know the story. You’re probably tired of it by now. 305 pound man walks into a Weight Watchers location when he knows no one but the counter attendant will be there. Just to get some information (but what does our culture really NOT know about Weight Watchers) and to weigh in.

We know how we feel, but, for whatever reason that number is so important. Looking back to the “weak before” I have to ask myself what I was looking for in that morning–a score? A grade? A judgment?

What you may not know is that after I got that number, I drove up the hill and had a nice big lunch at the local Taco Bell. Yes. Just like the student who dismisses every comment you made in the margin of a recently-submitted essay to see how many points they received, I had my number and I had already summarily dismissed every affirmation that “Dottie” had offered to me while I stood there thinking about the weak that had been, and the week that was coming (weighing in helps us to think in terms of week now, by the way. And they are still seven days as I note), and the potential weak that would be there at every turn.

And in that next week, I got on my treadmill. There was no way that I would go out on the roads of our subdivision in my moment of what I perceived to be my greatest weakness. I would do a mile on the treadmill each day.

And. . .oh. . .those miles. I dreaded each and every time I stepped on that treadmill, one I had purchased the February before as a kind of Valentine’s Day/Birthday purchase. Nothing says love like the affirmation of how one feels matched by the tool that would be designed to challenge deep-seated notions of the self. Goes right to the heart, doesn’t it?

But, in the weeks to come, we kept hitting that treadmill. Plodding. Walking. Increasing inclines to walk uphill. Marking time as it ticked off the digital display.

Looking into the full-length mirror that makes up the closet door in the room where our treadmill is and feeling nothing like happy. And nothing like love.

Oh the humanity of it all. And we wonder where our students get this kind of self-loathing. My friends, our generation didn’t invent angst and self-loathing, but we did offer the psychological paradigm some pretty good spokespersons–some of them now iconic within the movement.

What is our natural gift of self-loathing that couldn’t be matched with a healthier self-loving? We marvel at the loveliness of a tree while disregarding every scar upon and within the bark. We don’t even notice the limbs that no longer sport leaves or how the fruit sags a little more this season than last. All beautiful. We write poems about these. We celebrate each year an effort to keep these around. And then we look in the mirror and miss that we are part and parcel of this beauty.

We are given to belittling ourselves when what we really need is to begin believing in ourselves. Believing in our beauty within. It’s an endowment bestowed upon each and every one of us. We were created for beauty. And if you get creative, you can find that beauty and tap into it. . .but first. . .you got to believe it.

Think back to the best thing you have ever done for yourself. Have you done anything since to match or rival that gift you gave to yourself then? Or is that moment encased in something we’ll call the WBWA showcase?

We all have a “weak before.” It’s the recognition of something that has happened so significant within our lives, that we bookend that event in the context of what came before, what happened during, and what happened after.

But the WBWA showcase is not a showcase at all.

The “weak before” and the “weak after” is the shoebox in which we tuck our greatest feats as human beings for safe placement under the beds wherein we dismiss–albeit temporarily–our disappointments of the day to hope new hopes before we start to dream new dreams.

On February 9th, 2013. I set out to run twelve miles. And you know what kept that goal on the radar. I shared it out there with my Facebook and Twitter friends. A part of the #runteacherrun and the 250/500/750/1000 communities, I share what’s coming as much as what’s already happened. I offer congratulations when someone else posts an achievement, but I draw just a readily from the affirmations I receive when I post to these places.

When you step off of your porch for twelve miles, when you are 6’3″ and 255 pounds, you are essentially preparing yourself for over two hours of continual movement. You will do this for two hours. You will not be back until 7AM (yes. . .we get started that early).

There was a “weak before.” I had thought about those twelve miles all week. What would the weather be like on Saturday morning? Could weather be my “out” for the day (I like to use the word “out” vs “excuse.” We all have excuses, but how many of us have thought about the many ways into something we really want rivaling the numbers and entities that keep us out of them. Hint–that number is usually pretty close to one)? Would my legs be okay? I’ve been wrestling a little with some lower leg stuff, but we are working through this by scaling back vs sitting back.

A sidetrack here. . .and this is a little irresponsible. . .but I do run with a little bit of pain. I am a big guy. I ache a little more than I did as a younger man. But I WILL NOT QUIT. And that discomfort I feel that leads to accomplishment is by far and away better than the quiet pain I had been carrying as a non-exercising, unhealthy man. Think about it. Our bodies tell us in very quiet ways–sometimes almost outside of our own earshot–that it is aching for change. Aching for improvement. But I digress. . .

When I got to three miles, I thought, “A quarter of the way. I feel good. But I still have a long way to go.” My pace was ten minute miles and I was hitting that pace like it was my job. No racing or records on a day when you want to set a goal.

Six miles in. Halfway. Feeling great. The miles are still ten minute miles. Settled into a pace and moving right along. And then I passed my house. That first loop. Everyone was sleeping inside of that house.

I could have been sleeping in that house. But I felt just a little triumphant passing my own house up for a second lap around the subdivision. Hills that have challenged me in those earlier months are now routine and I sometimes take them two or three times depending upon the route I take.

Nine miles in. So close that I start to tell myself, “Hmmm. . .if you really think about it, what I am doing right now is finishing a 5K before hitting that twelve mile mark.”

And you are glad that you are outside.

And you are glad that it is dark.

Your eyes are red and wet and the cheeks follow.

You could blame the chill.

But, instead, you embrace the challenge.

It’s okay to cry at this point. Because you have met the challenge of the loudest voice telling you that you probably could never do this despite your best intentions.

Our own voice. . .it can be critic or coach.

What is that old chestnut by Shel Silverstein, “The Little Boy and the Little Old Man?”

I think tears are Accomplishment’s way of relieving itself of the welling up that occurs when we lock all that we could achieve in something we think is a treasure trove of “I coulds” that is really a treasonous trapping of all that we could be. I’d like to express more them. . .but there is too much light in this world sometimes. And still others, I must share that light with others who find themselves on the same road. I’d hate to unsettle them with my own sense of celebration.

And when the Nike app tells you that twelve miles have been completed, you continue to run along and little bit before slowing to a walk. You’ve been on the road for two hours and seven minutes.

You are part of a very small population of people who can (and will) actually do this today.

This is you. Recognizing that the “weak before” is no match for your new “the me no more” mental state you have adopted.

This week, I’d like my friends to think about the reasons they are not getting out of bed in the morning to move or why they are not moving in the afternoon.

It’s Resistance, party of one.

List every reason that this is not happening and you wouldn’t allow any one of those to keep you from doing something you felt was important enough to disregard and to dismiss that which kept you from doing it. Line up all of your obligations and priorities and take a look to see where YOU are in that lineup. Did you put yourself in the back of the pack hoping that later on you’d get ahead–somehow–of all that is “before” YOU? It’s a dangerous pace to set and to keep.

Twelve miles. Next week. . .as a birthday present to yourself, you will hit 13.1.

You’ll type in “Mini!” right before that hashtag, #runteacherrun.

It’s an important goal. And you have a week to prepare for it.

But, this morning, you come back into your warm house.

You take out the new yurbuds (Mr. Hankins highly recommends these guaranteed not to fall out headphone thingies). You peel off the new knee-high compression socks, chuckling as you think to yourself, “Great. I’ve become my grandmother.”

And you will answer with a certain amount of Pride (which doesn’t always express in tears like tears but does manifest as a swelling of the chest area), “Twelve miles.”

And when you get your haircut later that morning, you recount all of this to the hairdresser. She listens intently.