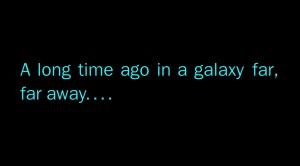 There is this scene in STAR WARS wherein Luke is first “getting those droids cleaned up before dinner.”

You probably remember it.

Luke is scraping R2-D2 with a tool when he remarks:

“Wow, you’ve got a lot of carbon scoring on you. You guys see a lot of action?”

We are sharing STAR WARS with our Room 407 Readers while they read R. J. Palacio’s WONDER this marking period. We are considering the film because of the number of references that August Pullman, the main character in Palacio’s book, makes to the film that were being missed by my juniors.

All of these. . .were getting by my Room 407 Readers. They simply didn’t have this film in their toolbox. Even with a sense of “assumed consumption” for all of our cultural references to the film, the references were getting by them.

And I had to do something.

And in the midst of this something, I got to see STAR WARS again.

And I got to see it for the first time.

Let’s replay that scene again with Luke and R2-D2.

Imagine you are side-by-side with your student. In a conference scenario.

Do a quick formative assessment of the student.

What do you see?

But the student hasn’t seen a lot of action.

They have seen a lot of assessment.

And I have yet to find the tool that can effectively remove this kind of carbon scoring.

But, while watching STAR WARS with a new lens since my first viewing in Petoskey, Michigan back in 1977, I am taking away these talking points from inviting “The WONDER to be with me” this marking period.

For those of you who. . .umm. . .wonder how I pair literature and film, you’ll want to take notes. . .or print this off for later use. . .I kind of tickle myself when I stumble upon these kinds of ideas.

These ideas are no more than a half hour old as I present them to you here. Here is how August Pullman (WONDER) and Luke Skywalker (STAR WARS) teach us how to teach our students with a new understanding of who they are and the mission they are upon.

2).  Both have their sense of true “wonder” stripped away systemically.

4).  Both are about to enter into a larger world for which they are not equipped.

5).  Both are introduced to an intangible quality they don’t grasp initially.

6).  Both have initial training that is short-lived but long-range in scope.

7).  Both have a shift in world view only after reconciling what is within them already.

9).  Both are celebrated before adoring crowds for their achievements in the end.

10).  With reflection, both able to grasp what/all they have learned in a short time.

And. . .true to my word. . .I want to get these ideas out as fresh as they came to me this afternoon. If we check the time stamp, we must submit now.

My friends. . .my the wonder be with you.