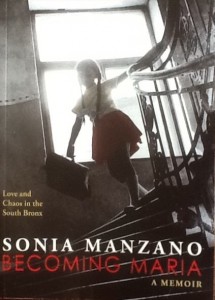 (Review based upon the Advanced Reader Copy of BECOMING MARIA: LOVE AND CHAOS IN THE SOUTH BRONX)

After 45 years, Sonia Manzano is retiring from her role as “Maria.”

She is leaving Sesame Street.

And this fall. . .Sonia Manzano will tell readers. . .how she “got there.”

Of any Advanced Reader Copy of any title I have had the pleasure of reading in the past few years, this one has seen its reading abuses or perhaps these are the expressions of tough love a reader renders upon a book, the underlining that does not stay true and begins to ramble through a printed line, the dog-earred corner now permantly creased, the folded over sections that cause the whole body of the book to buldge now as it lies on the table. . .finished.

Uncharacteristic of the way I–or many a reader–approach a book, I went right to the Acknowledgements first. Who would Sonia thank when my first romantic notion was that millions of people of my generation (I am forty-five this year) would be lining up to thank her for what she has given us from the simple act of fixing a toaster. . .again and again and again. The filaments are tender. Someone must tend them to keep them glowing, recognizing that at times it becomes necessary to push a lever down in order to light the whole thing up.

In the Acknowledgements, Sonia writes, “lives are more often shaped and colored by how we remember those events and the series of feelngs that went along with them.”

Manzano talks a lot about feelings in the acknowledgment section of her memoir, citing feelings as the remainder of a memory if the particulars have been smudged somehow by time.

Like 2014’s BROWN GIRL DREAMING by Jacqueline Woodson, Manzano’s BECOMING MARIA takes us right back to the big city with its crowded tenements and small shops and busy streets. But, unlike BROWN GIRL DREAMING, there is little buffer for the protagonist in BECOMING MARIA. There is no refuge in either the city of dreams or the stability of a grandmother’s house in another state.

For Manzano, there is city. There is a culture. There are many conflicts. There are knives hidden in the stove that serve as a reminder that Sonia’s life is threatened each time her father returns home.

This is not every reader’s memoir.

In confidence, I suggest it might be some reader’s story.

And honoring that the two memoirs/experiences of the two authors are as different as yours may be from mine, I make the suggestion that BECOMING MARIA becomes a potentially-powerful “ladder” for BROWN GIRL DREAMING by way of female protagonists of color and culture that quietly tell the #WeNeedDiverseBooks community:

Wherein Woodson uses free verse to describe the journey that brought her into a world of reading and writing, Manzano uses prose to demonstrate the punches taken and the punches landed that would bring her to the origins of Godspell and eventually to the office of Jon Stone.

Manzano presents with tenderness the struggles within the many apartments and attempts at a home her family tries to create. The mother who performs miracles making eight sandwiches from a single can of tuna. The father who stores away inconeniences and perceived slights that surface in drunken rage. A sickly brother will remind readers of the story line within BROWN GIRL DREAMING. A grandmother given to culturally-based superstitions will see something tragic and comic all at the same time in Bon Bon.

In this gritty account of urban childhood, the woman who would teach us all the alphabet, help us with our number counts, and introduce us to the people in our neighborhood, Manzano builds into the narrative her own experiences with learning in the classroom and within her immediate community. Wherein BROWN GIRL DREAMING does build in a sense of religion and a higher power, Manzano builds in the the necessity of maintaining a horizontal hold if one is ever going to make it to a show like Queen for a Day.

If we have learned from Manzano over the past forty-five years, it has happened with the assistance of animated clips, larger-than-life Muppets, and simple, sing-along lessons that finish in under an hour. For Manzano, these lessons would not come as easily.

Teachers who encourage reading at home when there are no books at home. This results in the mother telling her daughter about men who throw coconuts at the heads of their wives. Women who die of broken hearts. Women for whom her own mother lights a candle for their sense of saintliness. A sense of pride that closes Part I of the book when Sonia witnesses and celebrates a moment of her own mother’s ability to stand up and to stand firm.

Teachers who encourage participation in the classroom but miss essential feedback. Notebooks are passed out but no one passes through a notebook to capture the life of a student dreaming. Erasers are banged together to release the dust of the day with no outlet of the same for a young girl who comes into her womanhood with the notion that she has come into a curse. An account of Sonia keeping an almost year-long secret drew emotions from this reader he did not know were or would be there.

Manzano’s memoir has a quiet theme throughout the book: Opportunities that come of one’s simply showing up and one’s doing the work. Standing in place even when the edges of that place are blurry.

But it is the chapter “West Side Story” that I really liked within Manzano’s BECOMING MARIA. No spoilers here, but I would love to talk to readers as they finish the book to explore what “text” means along with “diverse text” in the lives of our students.

A number of diverse characters come into Manzano’s life that not only offer up multiple talking points regarding the different types of diversity one might encounter if open to them but demonstrates–early on–how Manzano would be able to approach a role and to keep that role for almost five decades as she worked with “the people that you meet when you’re walking down the street.”

The cobbled path that would eventually land Manzano upon the stoop of the most famous brownstone in television history is marked with inner-city arts programs and opportunities to learn by being on the stage. Authentic experiences with acting and exploring the art of acting one might think only extended to the priviledged.

Manzano is also able to weave into the memoir the account that would become her Pura Belpre Award Winning THE REVOLUTION OF EVELYN SERRANO (another title I hope my readers know already).

The language in BECOMING MARIA is brutal and necessary. The raging father uses the language of rage. An account of an interaction with a shopkeeper is hard to read but necessary to a story within the story that brings us to the beautiful Manzano we know today.

Manzano’s BECOMING MARIA is a beautiful blend of Coming of Age and Taking the Stage. It is my hope that this new release will find itself in classrooms celebrating diversity if not simply assigning autobiographies and memoirs. I hope that this book lands in an introductory theater class as a companion text to the required readings.

On a personal note: Thank you, Sonia. For all you have done–small favors and comments along the way–that have helped me and my Room 407 Readers. Your story will find its way to an early-in-the-year book talk that will have the book placed early on with a reader who probably needs it. And. . .on a selfish note. . .I cannot wait for the audiobook that has your voice reading your words of your story.