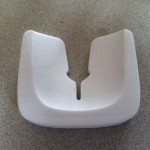 This highly technical piece was the cause for great frustration and delay of game-playing time at Hankins Ranch recently.

It’s actually foam. And it has no other purpose than to keep a piece of equipment from moving up and down and from side to side while shipping and handling the system. It’s the same kind of stuff you see if you purchase a new refrigerator or a flat-screen television.

Except in the case of these purchases, one can usually tell what is packing and what is product.

We’ll come back to this point.

With its sleek design, when this is “collar” is wrapped around the neck of the Kinnect, you’d miss it during the set up of the system.  You can see by the sloping shapes and lack of corners that someone took a great deal of time in researching and designing the form and the function of this piece that looks like high-quality plastic.

Noah’s Xbox 360 is the Star Wars Edition. If you saw it, you’d agree: it’s a very nice looking package. The box has an R2-D2 color/design scheme and the controller is C-3PO gold. It was the answer to a young boy’s birthday wish. He and a friend unpacked this system, gingerly. . .carefully. . .with the unbridled of two twelve-year-olds ready to unlock a gaming world that we children of the 80’s and early 90’s could only dream of.

When they unpacked the Kinnect, the piece was in solid white and black to match the box. So, when this collar was attached to the Kinnect, it was almost seamless. It really becomes a part of the unit.

But it’s real purpose is for the moment only. Despite is slick design, it’s really useless after set-up.

In fact, this piece was discarded after its picture was taken for the purpose of providing an image for this post.

The Kinnect, if you are unfamiliar, is an attachment to the xbox 360 that uses cameras and positioning to allow the player/gamer to control elements on the screen through body movement that the camera picks up and communicates to the xbox. It’s been amazing to me–an Atari 2600 generation gamer–to watch Noah (12) select items from the screen menus using subtle hand gestures only.

However, when Noah first set up the game, this collar piece was missed. The Kinnect was   prominently displayed, standing erect–front and center–of the table ready to do its work as part of the system. In many ways, its designed reminded me of a most inquisitive WALL-E, eager to work and eager to please.

The first message that came up on the television screen was this: “The Kinnect cannot move.” Simple. The machine was trying to tell Noah that the Kinnect was not functioning as it should. There were a few steps that could be taken at this point.

1)  Disconnect the Kinnect (I wish that the xbox folks would have had fun with this by   saying, “Dis-Kinnect).

2).  Shut down the system and try again.

Over and over, I listened to Noah, now assisted by his nine-year-old sister, Maddie try to figure out why this part was not working. After a while, both of these children of the twenty-first century were ready to abandon the idea of “Kinnect-ion” to play the games that would not require the piece.

I might add here, that with the cost of the system, Noah only got two games to go with his xbox 360.

Both were Kinnect-ready games. We’re in–lock, stock, and barrel. Physically, emotionally, mentally, and, for Kristie’s and my part. . .fiscally.

Abandoning the piece meant essentially aborting the program for which the system was purchased. There were promises made here–even if they were quietly spoken–that needed to be kept by all parties involved.

I had to move. I had to do something. What was happening was a continual loop of the children connecting and disconnecting and starting up followed by shutting down.

I consulted the xbox support site and there was the piece of instruction that was not appearing on the screen. Incidentally, it was the second instruction after the first, “Turn off your Xbox 360 console.”

“If there is a piece of packing foam between the base of the sensor and the sensor head, remove the foam.”

Packing foam. I know all about packing foam. It should look like cardboard origami. How could I have missed this? And sure enough, wrapped around the neck of the Kinnect, separating its camera-like head from its solid base was this little collar.

Once removed from the Kinnect, it began to move up and down, side to side. Again, we don’t want to assign human feeling and emotion to a mechanical entity here, but it looked as though the Kinnect were trying to communicate that it had been a long, tough road.

And now the children are gaming freely. Noah, Maddie, and the Kinnect are working together to enjoy the whole gaming experience.

This trouble-shooting episode led me to think about balancing texts. In a push for more technology in the classroom, are we quietly pushing aside traditional types of text? Even if not doing this purposefully, is it happening? And if so, who might be driving–even quietly embracing the shift? Electronic reading devices and laptops look seamless when the letters appear to fall into place where they should and line breaks are just as we expected them to be. We haven’t really changed the terminology much from traditional typed text to the electronic reading we now do more and more inside and outside of classrooms.

And the act of reading through either type still involves turning pages.

We move through text seamlessly in both venues. Perhaps there are little nuances that lead us to prefer one type over another. Perhaps we have a love-hate relationship with our devices that make us long for Amazon to release it’s Kindle Scratch-and-Sniff with its new book smell as a default theme.

But what I am talking about is the prompting versus the supporting that can come from either type of text (I am not so brave as to select one type over another. . .have you seen my friends/followers? I place myself tenderly in the middle).

Moving to a different type of text, the printed manual that came with the XBox 360 told me what needed to happen by way of trouble-shooting. Here’s where the XBox 360 people get it right: they seem to know that kids are going to rip through that packaging, pulling out the wires and cables and getting the game ready to go. Like most of today’s electronic devices, the start up is relatively simple. These machines are really becoming unpack and go with no more blinking LED displays to remind of us our programming failures on the local side.

Where the XBox folks get it right is to remember to include those print instructions, recognizing that it would be difficult to include every failure that might occur within the set-up process. These are discussed in detail in the print manuals and at a very nice support site that can be accessed on the internet.

But only when the user is ready to step back and take a look at the task and how the type of text fits that task.

Prompting in this case only led to frustration.

What was needed was the support from another type of text and a moving away from the dependence upon what the program was offering versus what the print had to offer.

This post is rapidly approaching 1500 words. I want to be kind to your time. I am walking around in this new thinking a little bit to try to get a feel for the direction based upon what I feel on the walls of the idea. I’d like to come back to this in the next week with some new insights and discoveries and share these with you.

My early thinking is that a move toward one type of text to another without regard for the tasks we are trying to accomplish may be a type of “collar” that could cause younger readers to “disconnect” even though the transition from one type to another seems “seamless” and the right thing to do for our twenty-first century learners.

My early thinking sounds like a popular aphorism making its rounds within professional development regarding integration of technology which says “It’s not about the tech. It’s about the teach.”

Are their particular types of texts that collar our younger readers. And do we recognize the prompts that tell us that they do not have enough room to move. . .or move at all?

Can we trouble shoot through Task–Text (Prompting through the Set-up of a Unit) to Ask–Next (Supporting through Inquiry, Discovery, and Purposeful Movement).

So, this is where I am this morning. My collar is off. I am looking around. I am excited to see where this is going.